The Handmaid’s Tale meets The Cowboys in a revisionist female-centric Western.

The setting and storyline are both familiar and deliciously divergent, as a midwife’s daughter in a transformed 19th century America is forced to flee her community for reproductive transgressions and joins a band of female and nonbinary outlaws.

While my experience of reading generally doesn’t include imagining a screen treatment, I couldn’t help but think of this as a film, with Tilda Swinton as the gang leader, and protagonist Ada’s part the hottest casting call of the year. The most fun I’ve had reading a Western since Tom Spanbauer’s Man Who Fell in Love With the Moon, back in the early 90s.

Let Me Tell You What I Mean by Joan Didion

The only fault with this brilliant collection of master essayist Didion is its brevity.

As I read, I kept hoping in vain that some sort of literary alchemy would add chapters before it would end. Such is the magic of the keen lens with which she looks at the world, combined with her unparalleled clarity of telling what she sees. These uncollected pieces include essays on Martha Stewart, Gamblers’ Anonymous, Robert Mapplethorpe and a visit to San Simeon.

It’s rare to find an essayist’s work that stands up after four decades, especially short works of journalism. Didion’s towers. 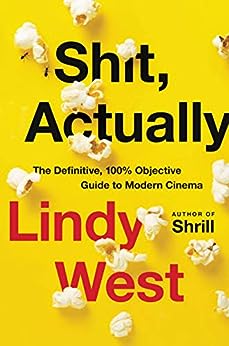 The Guardian columnist and author of Shrill reconsiders some of her favourite movies of the 80s through the aughts.

While I greatly enjoy “serious” film criticism (think David Thomson) this book held no appeal until I’d heard West in a segment of CBC Radio’s q with Tom Power. With my curiosity piqued, but expectations still set low, I was taken aback at how much I enjoyed and laughed out loud at this collection of brief essays - looking at 23 mainstream blockbusters including Top Gun, Reality Bites, Titanic, Twilight and American Pie.

West writes something like an 11-year-old girl - one in dire need of a Ritalin refill and a wickedly savage sense of humour, texting her thumbs raw (lots of CAPS, !!!, acronyms and snark). Not the sort of style I favour, and while didn’t care for or see 98% of the movies she examines, I couldn’t stop laughing throughout this very quick read. When I returned it to the library, I checked out several of the movies she detailed. I had fun with that too, seeing things in a different light and realizing just how spot on her observations were.

If you take yourself too seriously, or don’t watch cinema beyond Fellini and Goddard retrospectives at the local arthouse, this book is likely not for you. Those into pop culture willing to re-examine blockbusters past, have fun.

Maritime grit-lit exploring the intertwined misfortunes of several families in a small Maine town, over the course of a century.

The story jumps around with so many characters in different time periods that chapters begin with timeline and family grids to help you follow along. The landscape is bleak, the people small minded if not outright cruel, idiotic or malevolent, and the story builds as slowly as winter turning to mud season.

To be honest, if I hadn’t started reading this during a lengthy wait at a Lifelabs, I’d have given up on it. Trapped as I was, I read on, and found myself pulled in like one of the capsized characters drowning in the Atlantic; there’s something deep and relentlessly powerful here, if you surrender yourself to it. For readers of Alexi Zentner’s “Lobster Kings,” and those that enjoy slash your wrists literary fiction.